With apologies to Aesop:

Space and Time were disputing which was the stronger, when a planet came along wrapped in a warm ocean. They agreed that the one who first succeeded in making the planet bear life should be considered stronger than the other.

First, Space gathered atoms from the most distant parts of the Cosmos, but only succeeded in making a few lousy organic molecules, and at last Space gave up the attempt. Then Time gathered creatures from the future, when life had already evolved on the planet, and Space complained that Time had cheated.

And so Time snarled, “All right, smarty. You think it's easy to be me? You try it!”
Then they changed places and their contest continued.

Take all 24 coins, the Sun and Moon tiles for trophies and six more tiles for the board.

Flip the six board tiles grid-side up so that they form a 4×6 grid. Lay out the trophy tiles so that both players can see the ranks.

Flip all coins suit-side up and shuffle them. Place them on the board so that all the coins of the same suit are grouped together in a 2×3 space. 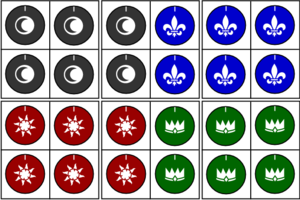 Flip the coins on the board rank-side up. If the four central coins show the same rank, reshuffle and re-deal the coins onto the board.

The object of the game is to swap coins on the board to create “DNA molecules”. For each DNA molecule the player collects a trophy. A DNA molecule is a tetromino, a group of four coins of the same rank (such as four 5s or four aces). The coins in the group have to be next to each other (either vertically or horizontally but not diagonally).

Examples of such groups are: Four coins forming a square, a straight line, an “L” shape, a “4” or “Z” shape or a “T” shape. The groups can be rotated or flipped.

There are two roles, Space and Time, and two rounds, Night (Moon tiles) and Day (Sun tiles). Each player plays one role in the first round of the game and the other role in the second round.

Space and Time have different powers and swap coins in different ways.

Space has the power of adjacency. Space may swap any coin for any of the coins next to it (orthogonally or diagonally adjacent). 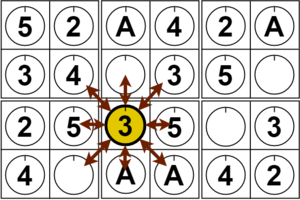 When Space swaps coins, the board “wraps”. The right edge of the board is considered to join up with the left edge, and the top edge with the bottom edge. That means, Space may swap the coins on all four corners of the board (but only two at a time).

Thus, Space may always swap any given coin with eight other coins, even if that coin is on the edge of the board.

Note: You can only use Space's space-warping powers for swapping, not for creating DNA molecules. DNA molecules do not wrap.

Time has the power of sequence. Time may swap any two coins anywhere on the board whose numbers are next to each other (in sequence). 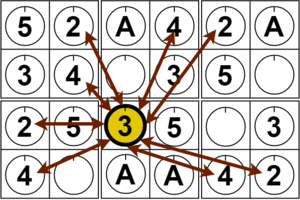 Thus, Time may exchange any given coin with eight others as well.

Note: You may not reverse the move your opponent has just made, even if you normally could.

When you create a DNA molecule, take the corresponding trophy for that rank. For example, if you make a DNA molecule from ace coins during the Day round, show it to your opponent and take the Ace of Suns tile.

Once someone takes a trophy, no one may score that rank again during that round. If you make more than one DNA molecule on the same swap, you may take all the trophies for the ranks you matched up.

The game ends as soon as