You are here: Piecepack » Piecepack Games » Cream of the Crop

Cream of the Crop

Competing farmers are trying to use the same farmland to grow their crops. They realized that to keep the pests away it is best to mix the crops they grow onto the same field. But the farmers cannot agree on who should plant which crops.

Farmers (players) use seeds (coins) or dice to move their tractors (pawns) around the farm (board) while trying to form patterns with the seeds. Successful patterns win prizes from the county fair. Collecting enough prizes wins the game. The seeds grow four different crops: almonds (arms), corn (crowns), melons (moons) and sunflowers (suns).

Separate the ace and null tiles from the tiles.

Place nine of the tiles grid-side up in a 3×3 square to make the farm (board).

Put the four null tiles face up and one of the remaining tiles grid-side up where everyone can see them. Those are the five prizes for the county fair. If you are playing with three players, use three grid-side up tiles to make a total of seven prizes.

You will not need the six remaining grid tiles, so put them aside.

Let each player choose a tractor (pawn) and place it in one of the corner spaces. For a four-player game, the players opposite each other will play as partners.

Place all the seeds (coins) in a bag and let each player draw three seeds. Keep the seeds hidden from the other players. If you do not have a bag, place them in the box and draw without looking.

Roll the dice to choose the starting player. 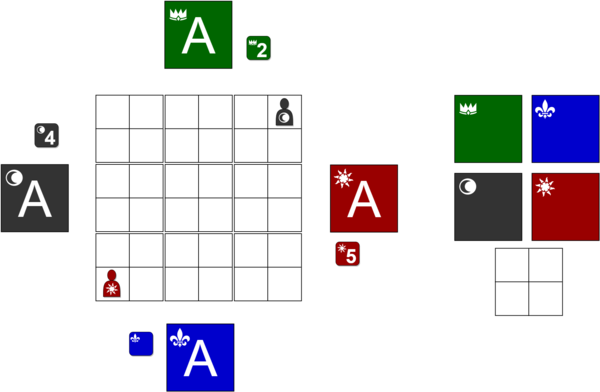 You can move your tractor either by using a seed or a die.

Move by seed: Pick a seed from your hand, and show the rank to the other players. Play the seed suit-side up on the board under your tractor. Move your tractor towards the direction indicator of the same suit by the amount of spaces of the seed's rank. If you move over the edge of the board, wrap around to the opposite side of the board and continue the rest of the move. If you play a null seed, then roll the matching die and follow the rules in the next section.

Move by die: Choose the die for the direction you want to move. Roll the die to determine how far you move in that direction. If you roll a null, choose a value between 1 and 5. Move your tractor that many spaces.

If you finish your move on a space with a seed, pick it up and place it in your hand.

If you finish your move on another player's tractor, pick it up and place it in any empty space on the board.

If you played a seed, draw another one from the bag and place it in your hand. If you played a seed and picked one up from the board, you still draw and end up with one more seed than you started with. But any player with more than five seeds in hand must choose one of the seeds and put it back in the bag. Once the bag is empty, the only way to get seeds is by landing on them.

Sun (red) and Moon (black) have already made their first moves. On Sun's next turn, Sun chooses to use a 3 in the direction of the arms suit. Sun shows Moon that it is indeed a 3 and then places the seed suit-side up where Sun's tractor currently is. Then Sun moves the tractor three spaces in the direction of the arms suit. In this case Sun must wrap around the board and continue moving from the top of the board. 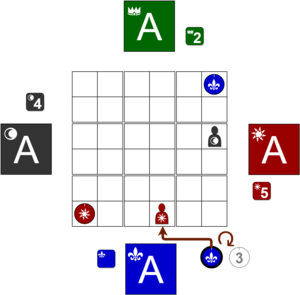 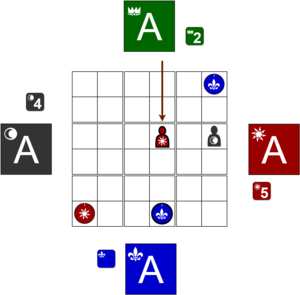 There are two types of prizes to win: crop and mixed harvest prizes.

To win a crop prize, create a diagonal, vertical or horizontal line with three seeds of one suit. Take the prize tile of that suit from the county fair.

To win a mixed harvest prize, create a line of four seeds with one of each suit. Take the grid tile from the county fair.

Each prize is only awarded once per game. For example, if the corn prize (crowns) has already been taken, creating a line of three crowns does not collect any prize. The seeds may be part of a larger pattern. But they must all be together with no empty spaces or other seeds between them. If you create a pattern but immediately land on one of the seeds in that pattern, you must pick that seed up, break the pattern and not collect the prize. Once you have collected a prize, it does not matter if anyone breaks the pattern.

In a four-player game, play as partners with the opposite player and collect three prizes as a team to win. Partners cannot discuss which seeds they hold. The only thing they can discuss is whether they want to get landed on. This ensures there is not too much “table talk” during the game.